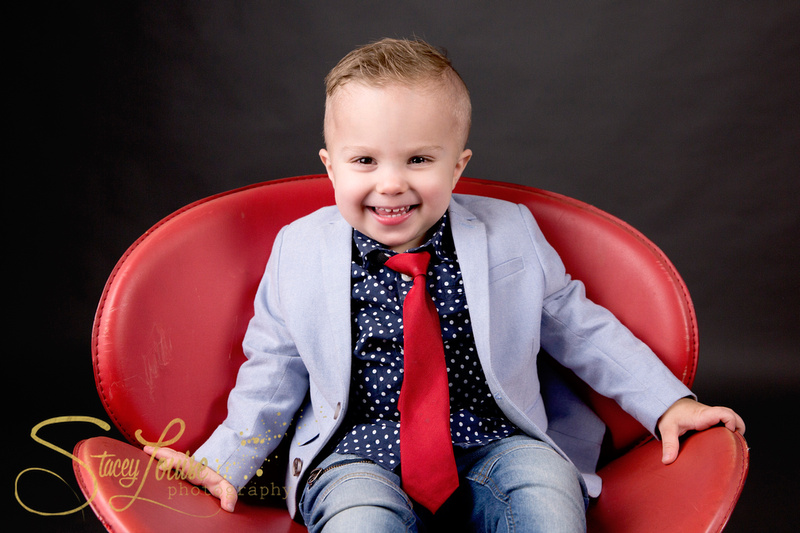 Say hello to Landon. He just turned TWO! I have been photographing Landon and his family since his big sister was just 3 months old! I couldn't wait to see him for his 2 year old photo session.

I always prep for sessions with my clients by asking them what they plan to wear. When Landon's Mommy sent me over a text with a picture of this outfit I totally squealed with excitement! Skinny jeans, a polka dot button down, and red accessories!!! It really doesn't get much cuter than that for little boys. This little fella is a heart breaker in the making, just take a look at his sweet smile!

Two-year-olds are traditionally the toughest age group to photograph. You might know that any tiny human at or around the age of 2 is the boss of whatever room they are in and of the people that are in it. I kind of use that as a rule when trying to photograph this tough to wrangle age group. I might give them some suggestions on where and how to sit or stand (or lay down or roll on the ground), I might jump around like a total crazy person, and I totally make silly faces and noises to try and get them to look my way, but these tiny humans are completely in charge. Landon was a slight exception to this rule...don't get me wrong, he was still totally in charge, but he was slightly more open to my suggestions on where and how to sit than most 2 year-olds. 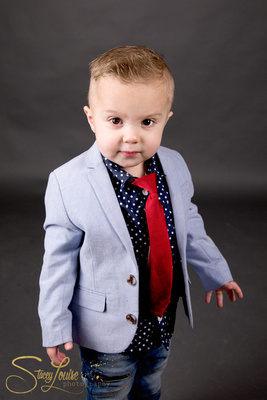 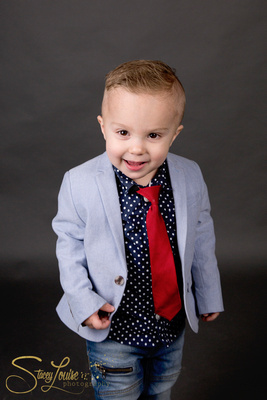 I love to capture all of their different expressions at this age group. Two-year-olds are FULL of budding personality. They are just figuring out who they are and what they can do, so I really like to show that off! This is all following my "The Two-year-old tiny human is in charge" rule. I just kind of give them an idea of where to stand, and then start making my own silly faces at them or ask them about their favorite song or tv show. After all of that they kind of take it upon themselves to show me what they got!

Sometimes I will try and change things up by adding in a fun chair for them to sit, stand, or crawl all over...remember, I said the two-year-old is in charge. 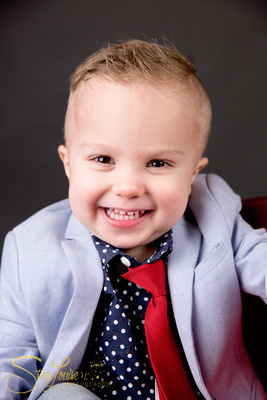 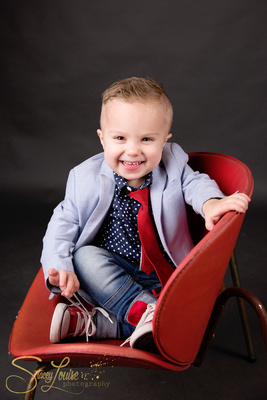 Getting these crazy people to sit, stand, and/or crawl all over a chair is my attempt to get them to slow down just a little bit and keep them in one spot!

I have to be quick, but I only need a few seconds (minutes if I am lucky) to grab a few quick shots that showcase all of that ornery! 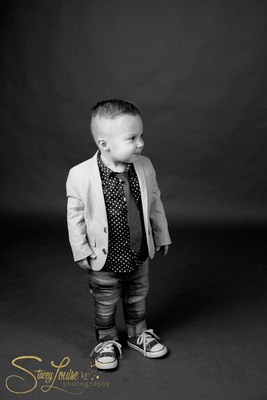 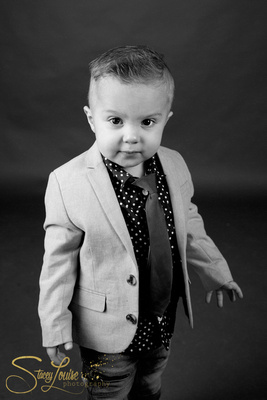 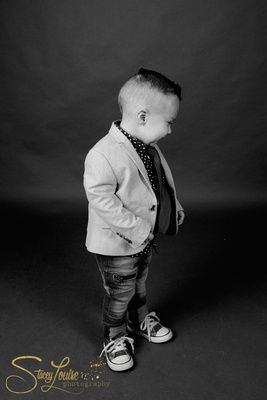 Like I said, it is usually just a few seconds that I have before they are down and off of that chair and ready for something new. So I am ready to be on the run with the boss! I like to try and get some candid moments that showcase those baby, chub cheeks because once they hit 3 they tend to lose them. I like to make sure I get a few serious, non smiling faces so that we can really see those sparkling eyes too! 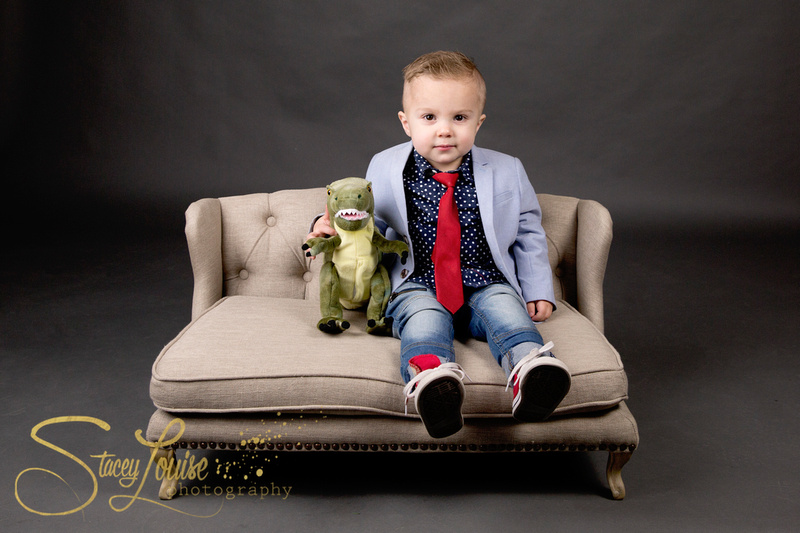 Don't think that I am in control too long though! These two-year-old bosses know just how to get you back under their thumb...that's right, they bring in reinforcements! How can I try and tell these guys what to do? They are totally fierce! They needed a little story break, and I was happy to oblige. 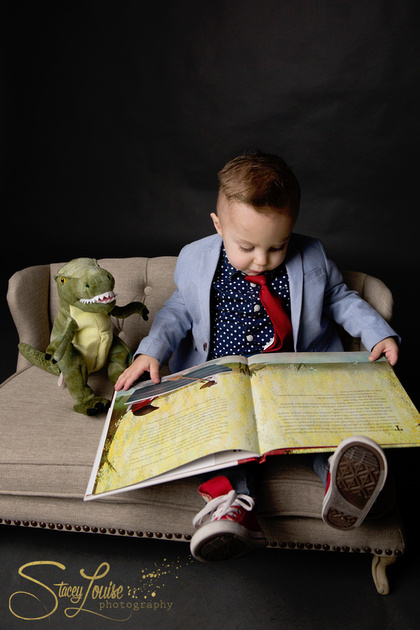 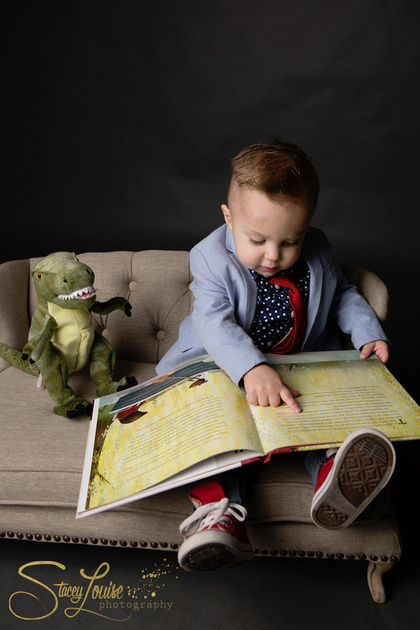 I mean, how could I say no? It made for some totally adorable photos! I am not kidding when I say letting these two-year-old tiny humans be in charge is the key to a successful photo session with them. They need to have the power (or think that they do, wink wink) to get them where we want them! hahaha It isn't always fun and games here at Stacey Louise Photography...wait a minute, who am I kidding...yes it is! We have too much fun, even when it isn't easy. I love working with all of your kiddos, especially when it is a challenge...it only makes me better, right?

Let's all take a minute to say Happy Birthday to Landon! Being two is going to be so much fun! If you have a two-year-old boss at home, I would love to meet him or her! Give me a call and we can set up a business meeting, aka photo session!