Life of a Stage Mom|Greensburg and Latrobe family photographer

Hey there, everyone! I feel like I am returning to you all after a loooooong hiatus. I mean, I guess that I kind of am. I haven't posted a blog since Halloween, but I promise that I have a good reason. Fall and Christmas are two of my busiest seasons here at the studio AND my son was involved in two big theater productions in December and January. That is what I wan't to tell you all about. If you have been following me for a while, you might know that my son started taking classes at a local performing arts school a few years ago. If you missed that blog, you can check it out here, he was the MOST adorable Captain Hook that I have ever seen.

Last November he was cast in his largest role to date in Stage Right's production of A Christmas Story the Musical as Randy. He was beyond excited and his dad and I so proud. This was his first major role in a professional show with Stage Right. Quickly my life became about running lines song with him and getting him to and from rehearsals. He and the rest of the cast rehearsed for three weeks before they opened December 7th at The Lamp Theater in Irwin. They had two sold out shows that weekend, and everyone in the cast totally killed it. 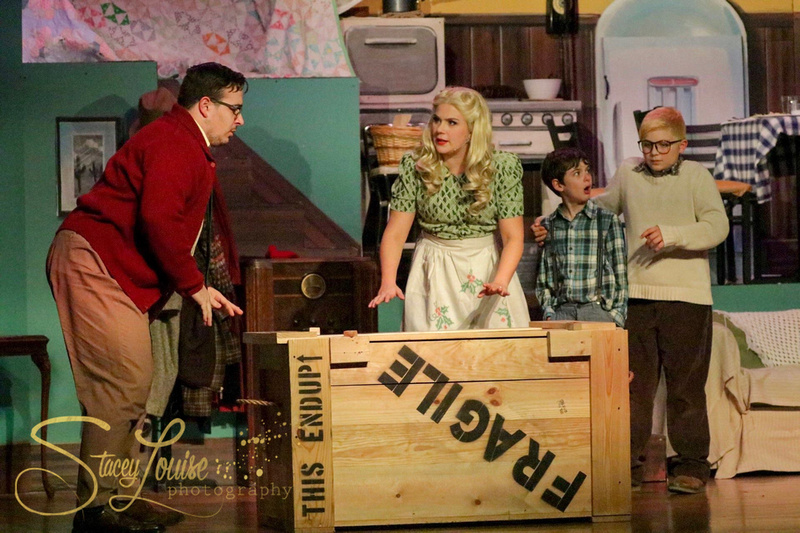 There he is, this person that I created, up there on stage singing, dancing and acting. If you aren't familiar, my son Brody is the one the in the blue plaid shirt. He was so fortunate to have such an awesome on stage family, Nick Lenz (as The Old Man), Savannah Bruno (as Mom), and Wesley Heverly (as Ralphie). They all took such good care of him and helped him so much since it was his first big role.

Because it was his first big role, I made the decision not to take ANY pictures during his performances. I wanted to be present and soak it all it. Luckily there is a dad, Doug Estok,  ho happens to take great photos at all of the shows. I asked him to make sure to get a few great photos of my guy and he totally delivered! Thanks Doug! I am so glad that I got to just sit in the audience and take in his performance! 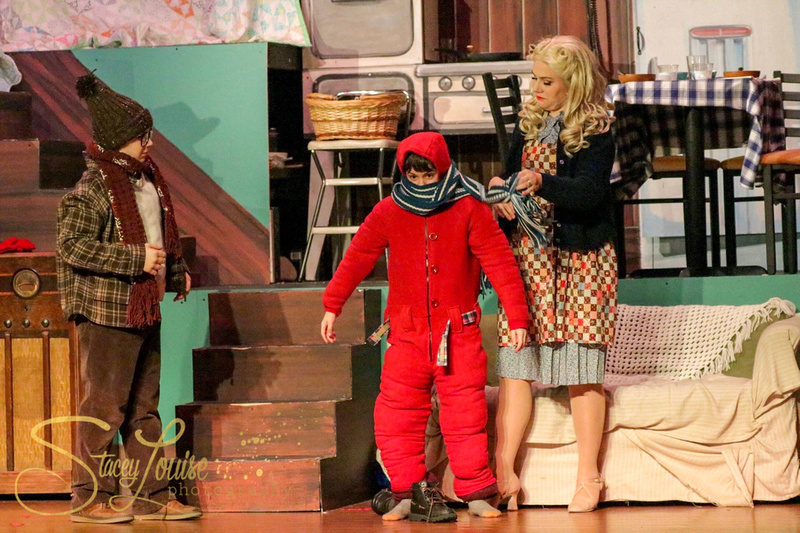 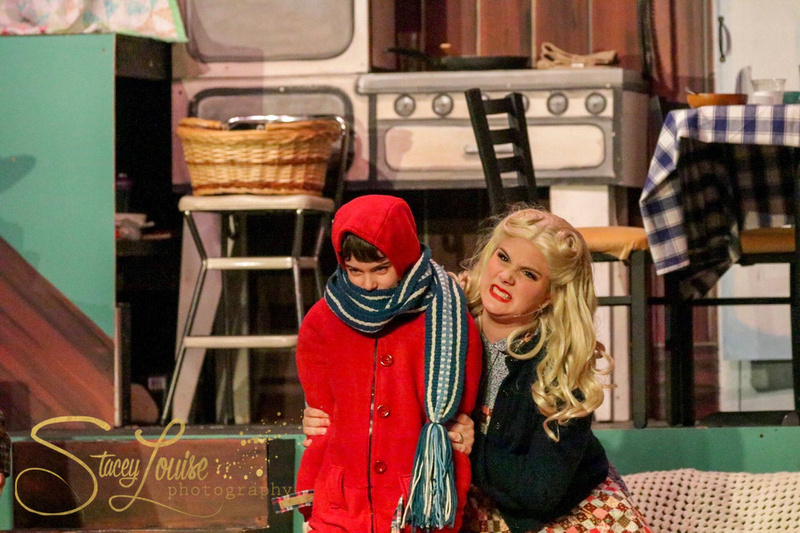 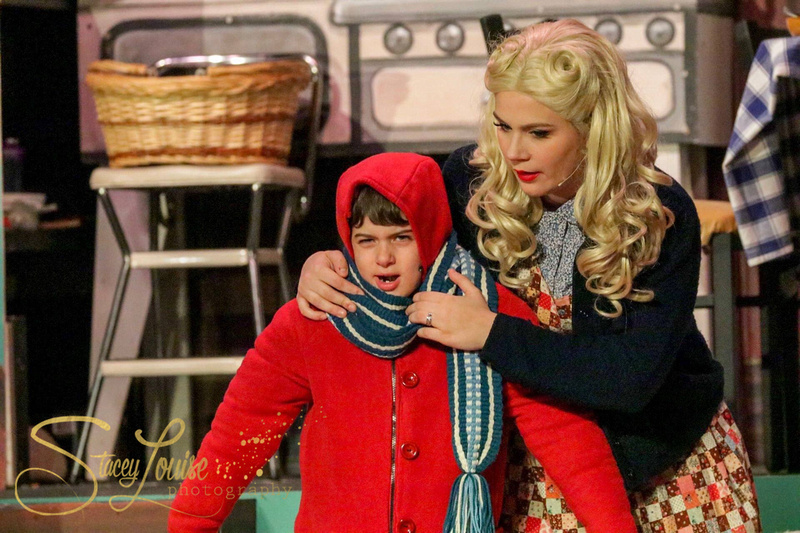 Here are a few more from those iconic moments from this story. See that snowsuit? I made that! Yup! From scratch I created that snowsuit! Can you believe it! 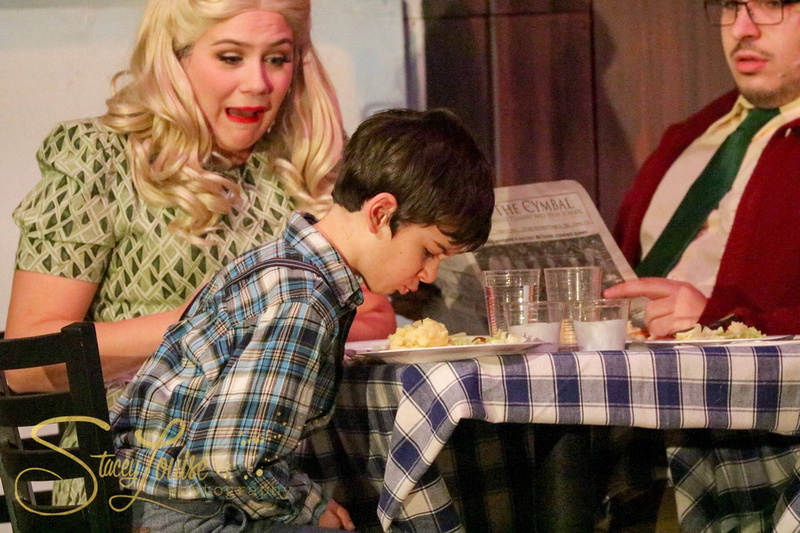 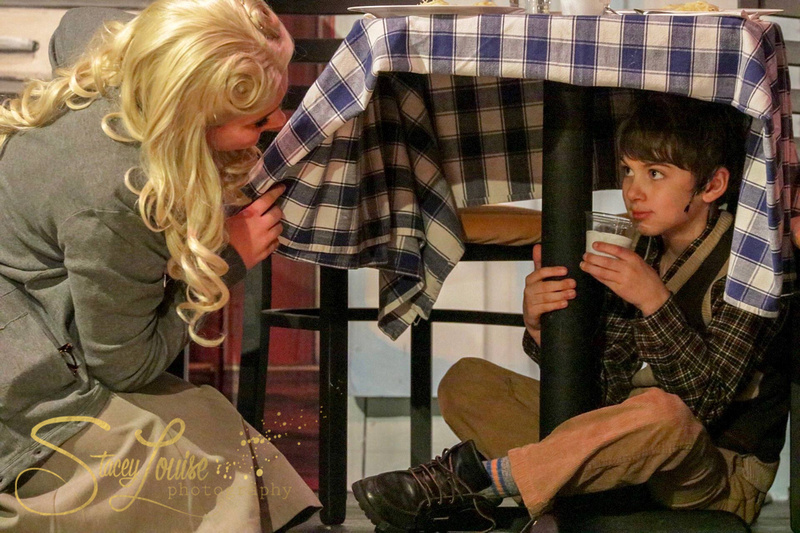 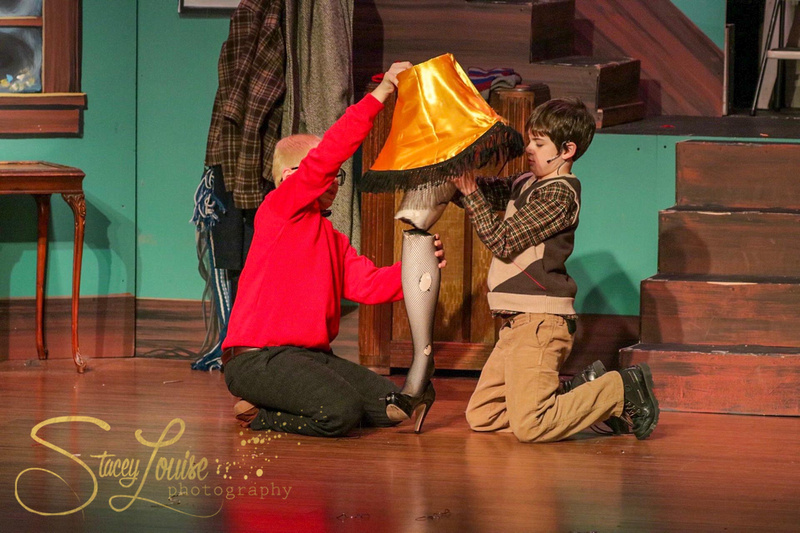 Brody really impressed me. He had so many lines to learn in addition to songs and choreography. For just being eight years old, he looked like a professional up there! 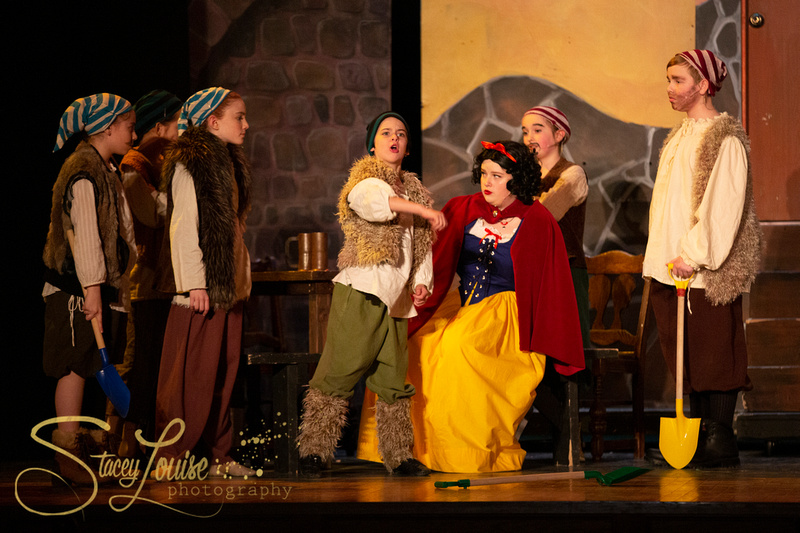 Fast forward a little to January and he landed the role of Took, the smallest dwarf, in Stage Right's original production of Snow White and the Seven Dwarfs. Stage Right's take on snow white is a little different from the Disney version that we all know. The dwarfs were all small and snow white had a sister but there was a prince, an evil queen, and an apple! I think it was the perfect choice for the Student Company show this year. This show is performed by all of the students at Stage Right, ages 4 to 18. Preschoolers to High School Seniors are all on stage together creating these productions. What they accomplish with these children is nothing short of amazing! Tony and Renata Marino with their team really pull the best out of these kids.

Since there were two weekends of this show, one at the The Lamp Theater and another at the Science Hall Theater at Westmoreland County Community College, I took some photos of my own. I sat and watched the show a few times and soaked in the moments and then the second weekend I brought my camera along to get a few photos. 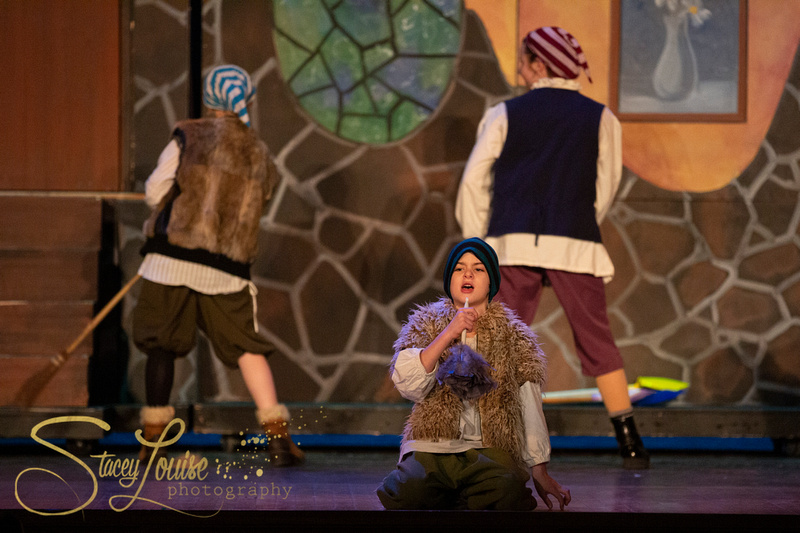 In one of the Dwarf numbers called "Chores" he had a little solo part where he rocked out into a feather duster! He slid to the front of the stage on his knees singing, Ta-da-DUST, Ta-da-Dust throwing in a few Ows and Woos! 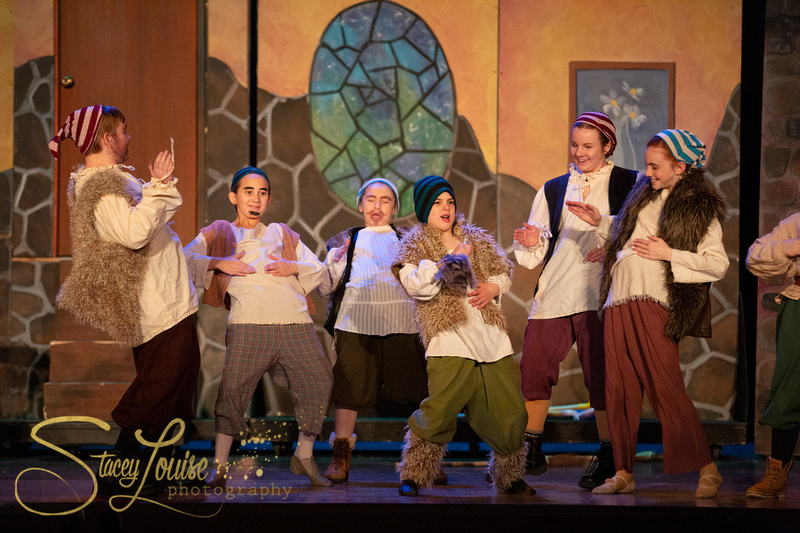 One of the things that I love most about Brody being involved in Stage Right is the community that they have created. All of the older kids mentor and look out for the younger ones. Brody has made some really special friendships with so many of them, they have become a second family to him and Stage Right is like a second home. They call it the Stage Right Nation and I really do feel like we have become a part of it. 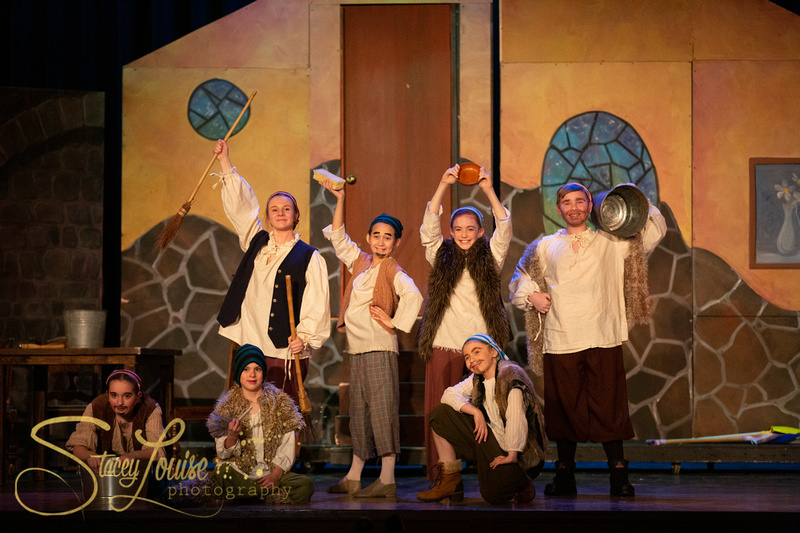 Brody has so much fun performing with his friends at Stage Right. I have seen so much growth in him over the last year there. He takes it seriously and puts so much effort into learning and improving. I have to say it really showed when he was up there being Took. I know I have said it so many times, but proud is just an understatement. 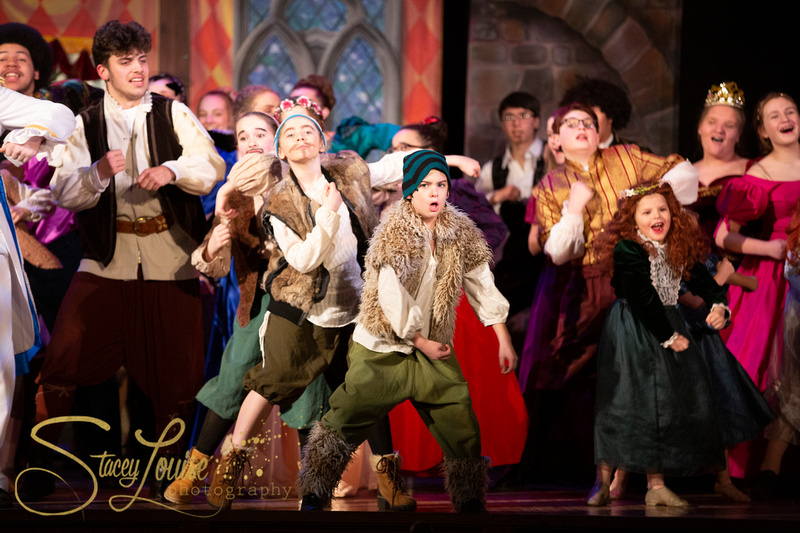 This is my favorite photo that I got from the show. It is the Finale number. I love seeing him with the entire cast. You can see just how much fun they are all having and I love the intensity on Brody's face. I feel like I can see him passion for what he is doing just coming right out of him.

If you missed Brody in these two awesome productions by Stage Right, don't worry there are plenty more where they came from. Next up on the agenda, Stage Right is preparing to break a World Record! The Current World Record for the fastest theatrical production is held by the Sharpe Academy of Theater Arts in the United Kingdom, they set the record at 15 hours. Stage Right will attempt to break that record on March 9, 2019 with a goal of 14 hours and 30 minutes! I have to say, after being a Stage Right Parent for the last three years, I know they will accomplish this goal. I have seen them pull off some really awesome things, and this will be no exception. They will find out at 5am that morning which musical they will be doing and everything will have to come together from there. Everything will be happening at The Palace in Greensburg and open to public, so you can stop by and see what is happening and you can even buy your ticket to watch the show! This is one you won't want to miss!

So that has been my life as a stage mom over these past few months. I am working on some new and different ideas for spring and summer sessions. Please keep you eye on our Facebook and Instagram to stay in the loop!